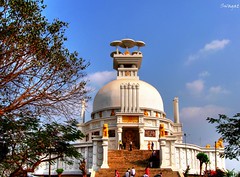 Flanking the southern banks of the river Daya, and eight kms from Bhubaneswar are the historic plains of Dhauli that were witness to some of the goriest battles fought in Orissa. The Kalinga War in 261 B.C. proved to be a turning point in not just Indian history, but also in the way people lived and believed in regions beyond the borders.

The gruesome sight had a morose and repentant Emperor Ashoka take to the teachings of peace and non-violence preached by Lord Buddha. The edicts at Dhauli are a living testimony to King Ashoka’s adoption of the doctrine of Dharma Vijay, or conquest through love, over Dig Vijaya, or conquest by the sword.