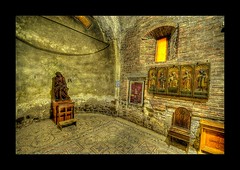 Grado (Venetian: Gravo, Friulian: Grau, Slovene: Gradež) is a town and comune in the north-eastern Italian region of Friuli-Venezia Giulia, located on a peninsula of the Adriatic Sea between Venice and Trieste.

Once mainly a fishing center, today it is a popular tourist destination, known commonly as L’Isola del Sole ("The Sunny Island"), also famous because it is also a spa town; together with Marano Lagunare, it is the center of a lagoon, which is famous for its uncontaminated nature.

In Roman times the city, known as ad Aquae Gradatae, was first port for ships entering the Natissa (Natisone), headed upstream to Aquileia.<br />

Quite close is the ancient Roman city of Aquileia; during the late years of the Western Roman Empire many people fled from Aquileia to Grado in order to find a safer place, more protected from the invasions coming from the east.

Today there are frequent finds of inscriptions, sarcophagi, marble sculpture and small bronzes that once furnished its villas. The remains of one of these villas has been excavated on the islet of Gorgo in the lagoon.

The Basilica of Sant’Eufemia (Cathedral), with the octagonal Baptistry (late 5th century). The church was once preceded by a quadri-portico, one of the columns of which is now in the centre of the Patriarch’s Square. The current appearance of the church dates from the reconstruction by Fra Elia (579), with a simple hut façade and a bell tower (15th century) on the right side, which is surmounted by a statue portraying St. Michael and known as the Anzolo (1462). The interior has a nave and two aisles. The main point of interest is the mosaic pavement from the 6th century, restored in 1946-48.
The basilica of Santa Maria delle Grazie. Begun in the 4th-5th centuries, it was renovated in the 6th century and restored in Baroque in 1640.
The Barbana Sanctuary. It is located in a small island in the Grado Lagoon. The original church was erected in 582 and was since rebuilt and enlarged.
Of the ancient fortress only a tower, turned into a private residence, and parts of the walls can still be seen. Under the Town Hall are remains of the Palaeo-Christian basilica of Piazza Vittoria.

Today, Grado attracts scores of tourists each year to its hotels and campgrounds. A large water park run by a municipal corporation is the main attraction, complete with indoor and outdoor swimming pools, and a health center offering spa treatments.

The town also boasts a well-preserved pedestrian-only center, in which many shops, bars, and restaurants are located.

Grado also offers facilities for many sporting activities, including tennis, wind-surfing, and golf.