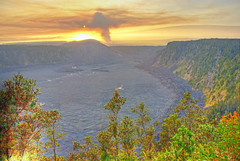 A HDR of the Caldera.

A volcanic depression is commonly called crater. A very large crater like this one at the summit of Kilauea is called a Caldera. At this point the Kilauea Caldera measures 2 miles across and 400 feet deep. Geologists believe that the reservoir of hot molten rock that feeds the volcano lies only 2 miles below.