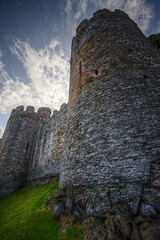 The town of Conwy in North Wales is probably best known for its large castle. Conwy Castle was built between 1283 and 1289 during King Edward I’s second campaign in North Wales to replace the destroyed, Henry III-built Deganwy Castle. It sits on a rocky promontory for maximum defense and visibility. Read more about the castle’s history here.

This is a glimpse of two of the castle’s towers/turrets along its western outer wall.