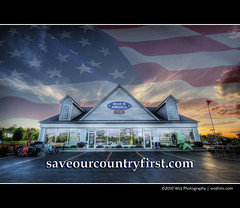 Mark Andol, owner of the Made in America Store here in Buffalo, asked me if I would photograph his store front for some promotional ideas. His store opened April 3rd and it’s already garnered a ton of media attention as well as customers because of what it stands for in the current state of our economy. He liked this image so much that he plans on incorporating it somehow into an interview he’s scheduled to do tomorrow night around 6pm on FOX. Hopefully, if he doesn’t get bumped. 😉 Here’s a link to an interview he did Easter Sunday morning on FOX & Friends.