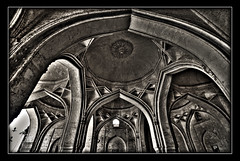 The Ibrahim-Rauza, built by Ibrahim ‘Adil Shah II (1580-1627), consists of his tomb and mosque within a square compound, both rising face to face from a common raised terrace, with a tank and fountain between them. The mosque has a rectangular prayer-chamber, with a facade of five arches, shaded by the chhajja and a slender minaret at each corner. Enclosed within a square fenestration rises the bulbous dome with a row of tall petals at its base. The square tomb with double aisles around it, the inner one pillared, has similar features but is finer in proportions. Two narrow arches, next to the ones at each end, break up its facade. On the interior, each wall has three arches, all panelled and embellished with floral, arabesque or inscriptional traceries. The tomb-chamber has a low curved ceiling made of joggled masonry, with empty space between it and the dome.