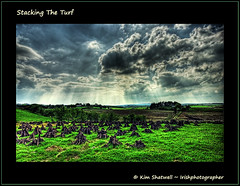 Cutting turf for the family fire is a centuries-old tradition in European countries where bogs are prevalent. Ireland gets more of its fuel from peat than any country except Finland, and bogs cover one-sixth of the available land. Turbary, or the right of private individuals to cut turf for domestic use has been carried on in Ireland for hundreds of years. Since the fifteenth century, hand-cutting of turf has been responsible for the loss of eleven percent of the blanket bog area. Upland Blanket bog covers mountain flanks from Kerry’s McGillicuddy’s Reeks to the Mourne Mountains and is common to the wettest portions of the country. Where the rainfall is less, bogs develop in shallow lake beds which over the years fill with peat, then aquatic plants, until finally a dome is formed. These are called raised bogs or sometimes red raised bogs and cover a sizeable portion of the Midland Plain.<br />

A third type of bog is found in the flat lowlands to the west. Lowland blanket bogs are unique in that they are formed in a rainfall-rich locale where the supply of minerals is kept up and the acidity down. The makeup of vegetation includes plants which thrive normally in poor fen land in the rest of Europe, namely, black rush, sweet gale, and purple moor grass.

Other plants typical of the various bog types include moorland spotted orchid, carnation and brown-beaked sedges, heath milkwort, butterwort, and a newcomer from America–the pitcher plant, introduced in this century. These form undulating lawns of bright reds, oranges, yellows, greens, and metallic blue-pinks.

A bog both grows and expands, burying whatever lies in its path. Trees in the path of the bog are first killed, and then their stumps buried. In County Mayo, there are discoveries of stone field walls, houses, even tombs, long buried under the encroaching bog. In many instances, relics of a fairly well-developed, four-thousand-year-old civilization practicing sophisticated animal husbandry methods have been unearthed. Surprisingly enough, evidence reveals the turf cutter of today utilized techniques known and practiced thousands of years before.