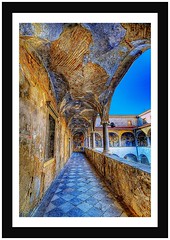 "Stari grad" (Old Town) was one among the castles which were erected across Croatia by aristocratic family Zrinski. The castle consists of two citadels with two interior yards (atrium). At the front of the castle there is a bell tower with a baroque dome, dating from 1790. The church of St Nicholas is a one-nave space, formerly a warehouse for salt, which was adapted for church purposes in the 18th c. The church is a constituent part of this complex and together they present a unique spatial unit. Despite heavy bombing at the end of WW2, the complex has maintained its original characteristics of an early-baroque structure. <br />

The Frankopan town – castle is a mediaeval defensive structure, situated on a hill above the sea. It dominates in its surroundings with its dimensions and shape and it represents a unique architectural accent in the environment. Petar Zrinski started the construction works in 1650 in the shape of a rectangular fortified yard with exterior corner towers of a circular shape. The castle was built on the basis of a late-Renaissance fort, but with numerous Baroque details. The constructor is unknown, but it can be assumed, according to economical and political connections of prince Petar Zrinski and comparative morphological research, that the main constructors were from Veneto.

The castle consists of basement level where there were warehouses, and the first and second storey surrounded by a beautiful atrium. The inner yard with a cistern in the middle (with coats of arms of the Zrinski and Frankopans) is opened with colonnades around it. Jesuits, the owners of the castle from 1883 have annexed the second storey and changed the interior ground plan arrangement.

Even though the castle looks like a fort from the outside, it wasn`t the purpose for its construction, because there was no need for such at that time. Still, according to its interior features it is constructed as a residential castle. It was luxuriously furnished.

The downfall of the Zrinski and the Frankopans after the failure of the conspiracy in 1671, brought to the ravaging of the castle, and numerous further renovations which have changed its appearance (monastery, colegium, hospital). Moreover, the main architectural elements and a large part of manneristic and early-Baroque architectural sculpture have been preserved, what makes the castle one of the most significant historical structures of the wider region. Apart from its cultural and architectural values, it possesses substantial historical, symbolic and associative worth, most of all as a former seat of the most important Croatian aristocratic families, and legend has it that it was the place where the Zrinski-Frankopans conspiracy against the Hapsburg dynasty came to existence.

Kraljevica (known as Porto Re in Italian and literally translated as "King’s cove" in English) is a town in the Kvarner region of the country of Croatia, located between Rijeka and Crikvenica, approximately thirty kilometers from Opatija and near the entrance to the bridge to the island of Krk. Its population is 2,897 and a total of 4,579 in the municipality (2001), and it is administratively governed under the Rijeka civil authority.

Kraljevica is a town that was written about as early as the 13th century. Today, in addition to having the oldest shipyard on the Adriatic, Kraljevica’s skyline is dominated by two medieval castles and a church of the Croatian nobles Zrinski and Frankopan. Kraljevica’s shipyard employed Josip Broz Tito, the former leader of Yugoslavia, during the first half of the 20th century in his early years of organizing for the Communist Party. After he became marshal of Yugoslavia following World War II the shipyard took his name, until democratic changes in the 1990s.

Today Kraljevica is also a popular tourist destination on the Adriatic coast. The Krk Bridge is located nearby, in the southeast part of the city.