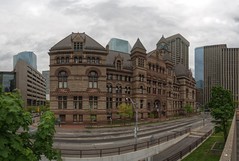 Responding to the need for larger quarters, Toronto’s civic officials began the task of designing and building Toronto’s third city hall. The successful architect, Edward James Lennox, took three years to design the impressive Old City Hall (1886-1888) that needed to address the two separate uses of the building – the City Hall and the court house. It was erected over the next 11 years (1889 – 1899) at a cost of more than $2.5 million. It was not only the biggest structure in the city at that time, it was also the largest municipal building in North America.<br />

Four years before the building was officially opened, Arthur Beales photographed the building under construction, illustrating Lennox’s slow progress – five storeys in six years. The basement walls are exceptionally thick (the base of the tower is 7 feet 9 inches) and borne by still more massive footings (12 feet 9 inches in places) that took especially long to excavate and lay. The cornerstone, unmarked and 6 by 4 feet in size, had been laid in November 1891 by Mayor Edward Clarke.

Impressive architectural detailing surrounds and fills this remarkable building. Master stonemason Arthur Tennison oversaw the placement of the gargoyles. Originally gargoyles spouted from many points, including the angles off the centrepiece on the north facade, the square turrets flanking both side entrances, and the main clock tower.

Above the monumental Queen Street entrance, in Romanesque Revival style, are grotesque stone carvings, which contemporaries suggested were caricatures of councillors. Here and in the corbels just below the roof, Lennox left his own mark. He included himself in the caricatures on the west side of the centre arch, and in the corbels, in the link portions of the building, Lennox incorporated his name in the stonework.

The interior is also a showplace of craftsmanship. The mosaic floor was patterned in Buffalo and carefully laid, and some walls are covered with neatly matched marble. Lennox’s fine detailing extended itself to wardrobes, worktables, handrails, and even the doorknobs that bear the city’s old coat of arms. Visitors can still admire the painted murals (first floor) by George A. Reid and the stained glass window produced by Robert McCausland symbolizing the Union of Commerce and Industry.

Although it originally housed the Council Chamber, courtrooms, municipal and legal offices, the building now operates solely as a courthouse. The old city Council Chamber is now courtroom 110 and retains much of its turn-of-the-century decoration.

Following the opening of Toronto’s fourth, and present, City Hall in 1965, Old City Hall was threatened with demolition during the planning of the Eaton Centre. A group of concerned citizens and community activists called, "Friends of Old City Hall", convinced the city to preserve this important landmark, that complemented Osgoode Hall and the new City Hall. Old City Hall was declared a National Historic Site by the Historic Sites and Monuments Board of Canada in 1989.

This was taken from the raised level at Nathan Phillips Square (New City Hall), just across the road from the grand old building.

This High Dynamic Range panorama was stitched from 27 bracketed images with PTGUI Pro, tone-mapped with Photomatix, and cleaned upp in Aperture.