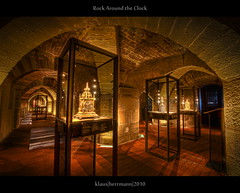 The story of this photo:
It was a bright, sunny and very hot day. What does the ambitious photographer do under such conditions? You are right! He goes to the basement of a museum and shoots things that would also be there on a nasty rainy day! LOL

But of course, the big advantage in this situation is that everybody else is out in the sun and you have the necessary time and space in an otherwise crowded place. This was shot in the basement of a museum in Stuttgart, Germany where they show very old clocks (16th and 17th century).<br />

This was a tough shot to process as it was not easy to get the light and the contrast right. I would have liked to get more exposures with a greater tonal range for the shot. However, some tourists followed me into the basement (it was that "follow the guy with the big camera and you’ll be fine"-thing) and made it a bit harder for me. I am not entirely sure I succeeded in compensating for that in the post-processing. But judge for yourself.

How it was tonemapped:
> Preparation: developed the raw files with ACR mainly in order to reduce the CA
> Developed on additional image in ACR with -4ev to get more details in highlight areas
> Photomatix version 3.1 (Detail Enhancer)

How it was post-processed:
> Post-processing was done in Photoshop
> Levels adjustment to increase the brightness
> Topaz Adjust on the entire image to get back the colors and the details
> Topas Denoise
> Some retouching to remove ugly "exit" signs
> Curves layer to increase the contrast
> Saturation layer (reds) on the floor
> Saturation layer (yellows) on the ceiling
> Slight vignette effect on a separate layer
> Sharpening using the high-pass filter

Related photos that you may like:
If you like this photo, you may also want to take a look at the following sets:
HDR – Stuttgart & Surroundings

Any comments, feedback or criticisms are highly welcome! Thanks for viewing!