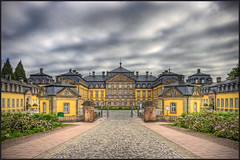 Bad Arolsen (until 1997 Arolsen, Bad being the German name for Spa) is a small town in northern Hesse, Germany, in Waldeck-Frankenberg district. From 1655 until 1918 it served as the residence town of the Princes of Waldeck-Pyrmont and then until 1929 as the capital of the Waldeck Free State.
Bad Arolsen is situated roughly 45 km west of Kassel.
The German-Dutch holiday road called the Oranier-Route runs through the town, joining towns, cities and regions associated with the House of Orange.
The earliest documents mentioning Arolsen date back to 1131 when an Augustinian nunnery was established there with the name of "Aroldessen". The nunnery was secularized in 1526 and in 1655 became the residence of the Counts (later Princes) of Waldeck, who converted it into a stately home. It was torn down in 1710 and replaced with a new Baroque structure (1713–1728) by Prince Frederik Anton Ulrich (1676–1728).
From 1918 to 1929 Arolsen was capital of the Free State of Waldeck-Pyrmont (after 1922: Free State of Waldeck), which was subsequently incorporated into Prussia.