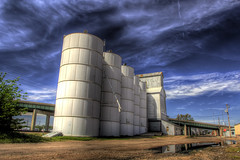 I have a feeling that if you dumped me in Nebraska for a week, I’d still come home wishing I had snapped just a few more photos.

If you follow my work, you know I stormchased in Nebraska a few weeks ago. I drove from Denver to Ogalalla, Nebraska late at night to set up for the storms the following day. Never heard of this town, never been there before obviously, and it was just the next stop on the road with hotels and me dying for sleep at 2am.

The next day I had a lot of time to sit around waiting for storms to pop, so I drove around this little old area of Ogalalla. This feed mill was abandoned and awesome. The clouds of course made me giddy to snap brackets for some HDR photos and the mill itself was a beautiful white color despite some old, rusty areas.

I love the overpass behind it, a place I ended up wandering to after taking this picture. I also have a couple of other shots of the mill, a little closer with more detail.