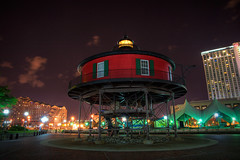 View Large On White
The Seven Foot Knoll Lighthouse is the oldest surviving screw-pile lighthouse built as an aid to navigation on the Chesapeake Bay. It was built at the mouth of the Patapsco River in 1855 and marked the shoal known as "Seven Foot Knoll" for 133 years. Its beacon was first lit in January of 1856.