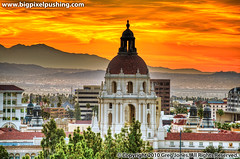 I had just left home and was driving to work. It was still dark but I could see a reddish glow on the eastern horizon so I decided to return home to get my camera and tripod. There had been a few spectacular sunrises earlier in the month and I was hoping to capture one. When I arrived at work the entire sky was ablaze with color. I had decided I would try to make an image of the Pasadena skyline from the 10th floor of the building I work in. This is one of the photos I made. The domed building is Pasadena’s City Hall. I wish I had offset it a bit to take advantage of the rule of thirds but like they say, rules are meant to be broken.