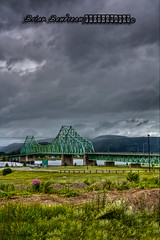 3exp HDR processed in photomatix and tweaked in photoshop

Built between June 1958 and October 1961, the bridge was opened to traffic on October 15, 1961. As an interprovincial crossing, the bridge was constructed under a three-party agreement between the governments of Canada, New Brunswick and Quebec.

Measuring 805 m (2641.07 ft) in total length, the bridge consists of four deck-truss approach-spans joined in the middle with a cantilever-through-truss structure. The middle structure is composed of two anchor spans and one clear span over the navigational channel measuring 380 m (1246.71 ft). It carries 2 traffic lanes and 2 sidewalks.
en.wikipedia.org/wiki/J._C._Van_Horne_Bridge