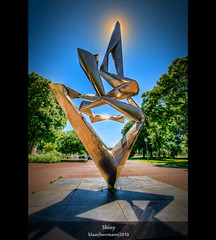 The story of this photo:
This is a sculpture in the central park (Oberer Schlossgarten) of Stuttgart, Germany. It is quite difficult to get a decent shot of this thing as it is surrounded by all kind of buildings and trees. Moreover, on a sunny day this is a very busy part of Stuttgart. So it took a few attempts until I got this one. I tried to work with what was there and used the trees in the background as a sort of frame that leads the eyes towards the sculpture. At least that’s the idea. Judge for yourself whether that works for you. <br />

If you look at the real sculpture, it does not have that golden tone. That is my artistic interpretation of it. The tone comes from reflections of the ground that I chose to enhance.

How it was tonemapped:
> Preparation: developed the raw files with ACR mainly in order to reduce the CA
> Photomatix version 3.1 (Detail Enhancer)
> Tonemapped two versions, one for the sculpture and one for the background blended later in Photoshop

Related photos that you may like:
If you like this photo, you may also want to view the following photos…
> A Subtle Hint (HDR)
> The Crab – Krabi, Thailand (HDR)

…and take a look at the following set(s):
HDR – Stuttgart & Surroundings

Any comments, feedback or criticisms are highly welcome! Thanks for viewing!