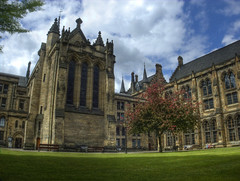 After taking my photos of the deserted cloisters I made my way back out into the West Quadrangle of Glasgow University which was equally as deserted. I was enjoying the lack of chaos so much that I decided to stick around and take a few more shots of the place.

The place was deserted so deserted in fact I could easily have been Charlton Heston in ‘The Omega Man’ which would have been cool but only if those hooded, white haired plague victims weren’t lurking around. Fortunately the only signs of life around were much less menacing than Brother Mathias and his minions – a cleaning lady going between buildings and a few latecomers who took up seats across from where this picture was taken.

Can’t wait to go back and visit.