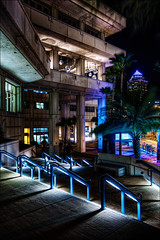 I decided to go back into the archives and process a shot that i took a couple of months back in Tampa, Florida when I attended Trey Ratcliff’s workshop (hosted with Scott Bourne).

This is from the first night I arrived in Florida before the workshop started. I was already pretty familiar with how to shoot bracketed exposures correctly but I needed help with the HDR processing. <br />

Trey gave a great basis and provided many insights and since then I’ve added my own tricks and methods to the processing workflow.

Processing Tip & Observation: For example the tonemapped file that is produced in Photomatix is strongly influenced by how you process the TIFF’s/JPG’s that you import from Photomatix for tonemapping. One thing I’ve noticed, at least when processing night shots, is that you get a much more sharp, crisp, realistic looking photograph if you pick a middle exposure, optimize it a bit in ACR as if it was the final shot, and then synchronize the other photos in the bracketed series to match. If you zero out all the settings in ACR and synchronize the other shots you get a photograph that in Photoshop can be made to look more painterly. Sometimes the effects are more noticeable in some photographs than others but this is what I’ve noticed.

It also might explain how photographs from one artist take on certain characteristics. It definitely comes down to processing but if you are shooting with a Nikon vs. a Canon and are processing your shots in Lightroom vs. ACR I imagaine there are differences with how the RAW files and software may affect the files that are eventually used when imported into Photomatix. (I haven’t actually tested this but i pretty confident this is the case.)

Technical Notes On This Photograph: This is a 14 shot HDR, processed by zeroing out the RAW files in ACR, then importing to Photomatix and processing the resulting file in CS4. I used a couple of the Nik Color Efex plugins to add a little extra pop to the photograph. This was again, processed on my laptop so the colors and contrast may be a little less than optimal but I’m pretty happy with the result.