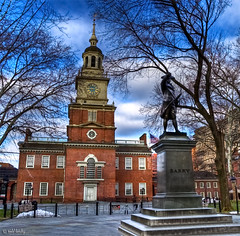 A 5 exposure HDR of Independence Hall in Philadelphia.

Independence Hall is a U.S. national landmark located in Philadelphia, Pennsylvania, on Chestnut Street between 5th and 6th Streets. Known primarily as the location where both the Declaration of Independence and the United States Constitution were debated and adopted.The building was completed in 1753 as the Pennsylvania State House for the Province of Pennsylvania. It became the principal meeting place of the Second Continental Congress from 1775 to 1783 and was the site of the Constitution Convention in the summer of 1787. The building is part of Independence National Historical Park and is listed as a World Heritage Site. from wikipedia.