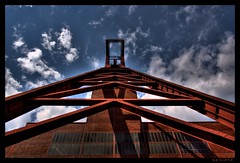 The Zollverein World Heritage Site – also known as “the world’s most beautiful coal mine” – today the most famous industrial monument and centre of the creative industry in the Ruhr area.

Schacht Albert Vögler, as the highly modern shaft was named after the director general of the GBAG, was designed by the architects Fritz Schupp and Martin Kremmer and quickly gained notice for its simple, functional Bauhaus design with its mainly cubical buildings made of reinforced concrete and steel trusses. The shaft’s characteristic Doppelbock winding tower in the following years did not only become the archetype of many later central mining facilities but became a symbol of the German heavy industry. Whilst this symbol may have slowly been forgotten when the German heavy industry started diminishing in the second half of the 20th century, it was this shaft and especially its characteristic winding tower that were to become a symbol of the Ruhr area’s structural change.