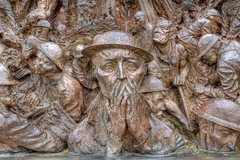 "The Battle of Britain Monument in London is a sculpture on the Victoria Embankment overlooking the River Thames in central London, England which pays tribute to those who took part in the Battle of Britain during World War II. It was unveiled on 18 September 2005, the 65th anniversary of the Battle, by His Royal Highnesses the Prince of Wales and Her Royal Highness the Duchess of Cornwall in the presence of many of the surviving airmen known collectively as "The Few", following the Royal Air Force Service of Thanksgiving and Rededication on Battle of Britain Sunday. This service is an annual event, taking place annually since 1943; the first service took place in St Paul’s Cathedral and since has taken place in Westminster Abbey.<br />

The monument utilises a panelled granite structure 25 metres long which was originally designed as a smoke outlet for underground trains when they were powered by steam engines. A walkway was cut obliquely through the middle of the structure, and is lined with panels of high relief sculpture in bronze depicting scenes from the Battle of Britain. The centrepiece is an approximately life sized sculpture of airmen scrambling for their aircraft during the battle. The outside of the monument is lined with bronze plaques listing all the airmen who took part in the Battle on the Allied side.

The sculptor of the monument is Paul Day and the architects are Donald Insall Associates. The statue was cast by Morris Singer, which is the oldest established fine art foundry in the world and has cast many prominent statues and sculptures in London and around the world, including the lions and fountains in Trafalgar Square."