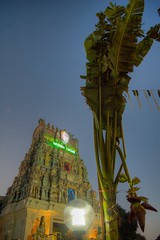 In 1962,on the eve of Pongal , Mr. P. Karupiah, a worker in the British Royal Navy Dockyard, had a very significant dream. He dreamt of Lord Murugan and a majestic golden cobra (Rajanagam) seated below a particular Elanthamaran in the swampy mangrove area west of Canberra Road. On the auspicious day of Pongal 1962, Mr. P. Karupiah went to the Elanthamaran and constructed a very simple altar at the base of the tree. Significantly, the tree had six main branches symbolizing its link to Lord Murugan ( also known as Shanmukha or Arumugam). He placed pictures of the deities Vinayager , Murugan, Ambal , and Lord Shiva on the altar, together with a large “vel” and started praying.

Word of the simple altar, and daily evening prayers conducted there, spread like wild fire. Hindus working in the Royal Navy Dockyard and living in the quarters provided by the British, which was within walking distance of te temple, soon flocked to the small temple.