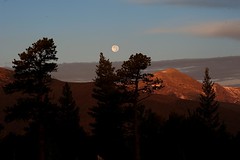 I headed up the South St.Vrain heading to Taylor on Fryday, although I was a bit slow, to sandbag a spot for when Eddie shows up in the Beast on Saturday. You’d think I’d be smart enough to keep my sites away from the likes of Eddie. I got the truck ready for the electric cooler and inverter for an extended camp outing up there. I cooked up an array of pizzas to eat cold as I sat in the cool breeze off the Divide. Edski stole all of them. The forest piles were extracted from the top so there was a wealth of space even though the deputy I chatted with said activity stays low. Primo de la Bimbos. The air was incredibly fresh. The light is always dead on the peaks in the later afternoon; it provides no sculpting of the shapes. The weather types offered sprinkles for the weekend. I am ready for them and their clouds. We’ll see if they are close to accurate for once.<br />

Friday afternoon, the Edster hadn’t shown (neither did the latest virus) I explored to find what I haven’t already shot. The shadows from the Rockies lengthened.across the terrain and now made it permanent for the night. What a relief – sleeping temperatures. I searched for the meteor shower but the full moon scotched that idea. Does shooting on the dark side reveal my dark side? Thanks to the Gods of evening cool. It was clear that there might be some full moon sets. I flagged through the first moonset but Eddie rousted me for the second. Here is the moon setting over pines and Mount Copeland as the sun starts to rise. Sunrises and sunsets are challenged by the terrain here. Use the Photographer’s Ephemeris. The forecast clouding might wreck the scene but maximize the later shots. The humditty is rising but not forming photogenic clouds.

This reproduction involved laying down the exposure that preserved the sky and mountains in the creeping dawn as the first, base layer. The trees RAW bump was the second layer. The posted image is 23% (5238 kb, compressed LZW) of the original. That’s before Flickr converted it to a .JPEG (.JPEG blows).