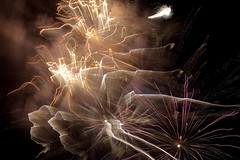 re: fireworks. I thought this fireworks shot looked liked golden sprinkles of fire. The golden explosions always seem a favorite of the crowds. It almost looks like that painted golden T.Rump hair that seems glued on and shellacked in place. Good comparison, but this fireworks reports only an explosion instead of a string of diatribes and a continuous flow of lies… one pop and quiet. A bit of stillness always beats a string of bombastic drivel. I think I need to super glue the Donald’s lips closed. One needs to spool history back nearly a century for a parallel to someone who was so prolific with lies that fooled a pool of fools. However, it’s fewer than 5 decades since another fool proclaimed government is the problem and cast doubts on on our founding fathers.<br />

I am again rolling out more of this year’s Fourth of July celebration using action on the medium telephoto-zoom. I was in the good spot I used after finding it last year. I ran into the same problems with procedures shooting fireworks at night as I did last year. Maybe I’ll get it right before long. This year was a chore: I had to buy my fifth for the fourth on the third! What else could go wrong? There were actual parking spaces at Golden Ponds before my long walk to the fourth venue.

The most prominent problem is tracking the action when triggering the exposure: the display and eyepiece go blank and alternate tracking strategy is needed. I am coming up with an apparatus that could overcome the problem, I had trouble with accurately tracking the action while using the monopod so I ditched the monopod this year. Why would I need steady? I have conferred with several psychiatrists about the many people with explosive personality defects even though psychiatrists have little to do with the study of science. There is a marked difference between psychiatrist’s study of explosive personalities and the study of psychotics like the Koch Brothers and the righties. It’s a cause and effect study.

I am adding these "action" shots to my stash of the fiery kind. Although I still have a pile to clean up, I dumped even more into storage this year. This one was taken at an opportune time that revealed there were multiple eruptions during the 2 1/2 second exposure. The EXIF reports only the start of zooms. Apparently there was good motion and the usual shakes as the fireworks erupted. I remained impressed with how these can appear stable at all at these slow exposures. The colors: I thought of how to react to the mass of colors.