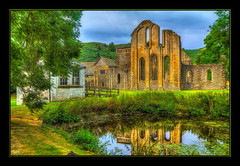 Valle Crucis Abbey is a Cistercian abbey located in Llantysilio in Denbighshire, Wales. More formally the Abbey Church of the Blessed Virgin Mary, Valle Crucis it is known in Welsh both as Abaty Glyn Egwestl and Abaty Glyn y Groes

Cistercian monks loved all things austere. Solitude ruled absolute. Finding this remote yet magical location must have at least raised a smile or two amongst the serious-minded bretheren.

Building work got underway in 1201. Seven centuries later and the abbey is one of the best preserved in Wales. Even the monks’ fishpond is still full of water!<br />

From its cloister to chapter house, with striking rib-vaulted roof, this abbey was shaped by the devout nature of its inhabitants. The abbey was also remarkably self-sufficient thanks to the lay brethren. They were happy to leave the choir monks to their prayers while they got on with the job of tending the land. All friends together? Not quite. The monks observed their daily offices in the choir, separated by a screen from the lay brethren who worshipped in the nave of the abbey church.

Far from an easy life, Valle Crucis Abbey suffered a serious fire and numerous attacks but went on to earn a reputation for its appreciation of the literary arts. In 1535 it was ranked the second richest Cistercian monastery after Tintern. By this time, the Cistercians had relaxed their orthodox austerity. A comfortable heated suite was created for the abbot. This new found wealth and hospitality didn’t last long. Valle Crucis was duly dissolved by royal decree in 1537.