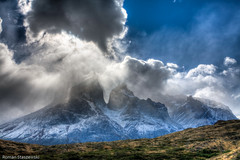 I only had time for one national park to trek since I didn’t want to rush it and allow for some bad weather days. I decided to go to El Chalten (where Glaciares NP is) since it was easier to get to from El Calafate. Heavy snow cut short my stay there by one day, so I had an extra day to use up. I decided to take a one-day tour to The Torres Del Paine NP in Chile. It’s a really long drive with border crossings, so it was a really long day – left at 5am and returned at 11pm. There were a couple of hours to walk some short trail, but the weather was turning sour, with clouds hugging the peaks. The sun was behind the Torres peaks, backlighting them, but I took advantage of clouds covering the sun and waited for the clouds to move over a bit to reveal the mountain. The picture got a very dramatic effect. HDR helped to make the photo possible since there was so much backlight and hot spots.