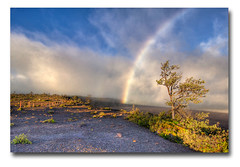 As we hadn’t been out to the Volcano in a while, we decided to drive on over after work and leave some offerings.
On the drive out, it started to get a bit foggy, then went from a light drizzle to a dark rain. We almost turned around and headed home as it was getting so wet and dark, but continued on. After pulling into The Park and driving around the Crater Rim Drive, just as we were approaching the area of the Jagger Museum, we came out of the misty clouds and into the sunshine. As we got out of the car to walk over to the rim, a beautiful rainbow appeared, seemingly to greet our arrival!