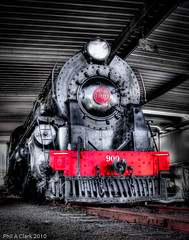 K900 Locomotive – "The Killer"
K900 was the first of all the K series locomotives to be built. Thirty of these massive ‘K’ class locos were built and were the mainstay of Main Trunk line running for New Zealand Railways between Auckland and Wellington from the 1930s to the 1950s.

K900 combines the best of American and British railway engineering with New Zealand innovation and was a masterpiece of design.

K900 received its nickname after it ran off the tracks at Mercer in 1940 killing the driver and fireman. Originally built as a coal burner it was converted to oil firing in 1950. K900 is one of only four ‘K’ class locomotives to survive.

Taken at the Museum Of Transport And Technology in Auckland, New Zealand.