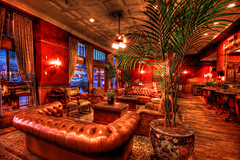 While in Fort Worth visiting my aunt we took a nice walk around the historic part of the city. This was a neat little hotel! especially with all the history surrounding it. Hundreds of thousands of cattle men would gather in fort worth for the cattle exange that if im not mistaken happened once a year? there was always rodeos and dances going on here throughout the years. fort worth was right in the middle of the chisholm cattle trail, which explains why so much cattle exchanging went on here. The trail streches from the Red river in texas to kansas. Something that really stood out to me was the daily cattle drive through the middle of town each day. those bad boys had horns bigger then my arms. there was also a man giving people rides on some of the longhorn bulls. I know, when you hear someone riding a bull you think of those guys you see on TV getting wrecked on bulls but these we nice bulls. Plus they didnt have a rope tied tight around their family jewels like those bulls on TV. <br />

A little interesting fact, the fort worth rodeo arena which is right in downtown is one of the biggest if not the biggest rodeos that goes on in the world. My aunt actually holds the arena record for barrel racing. the way my grandpa put it to me was any great barrel racer who ever rode rode in that arena, and she’s the fastest one who ever did it in that arena. pretty neat stuff if you ask me!