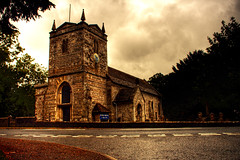 This is an exceptionally attractive church, although its setting so close to the main A350 road cannot possibly have been envisaged when it was built. All that remains of the original medieval church is the tower. The rest was rebuilt in 1713 entirely at the expense of Dr. Sloper, who was the rector. At the time the living was one of the wealthiest in England.

The design was almost certainly by Thomas Bastard, whose sons William and John, were to be largely responsible for the rebuilding of nearby Blandford Forum after the disastrous fire of 1731. The walls are of chequered flint and stone. Pevsner says that the north aisle arcade "has the medieval elements superficially georgianised". Nevertheless, the interior is exceptionally pleasing. The rather dominating pulpit decorated with very fine marquetry and a magnificent tester with golden pelican above is of particular interest. The reredos, which entirely fills the east wall, has the Lord’s Prayer written in gold lettering on the middle section and the Ten Commandments on either side. There are some good monuments. The font with a superb wooden cover, which can be raised by means of a pulley and a golden cherubic counter weight, is of particular interest. Note, it is very similar to the font in Blandford parish church. The pews are not of 1713 because the original box pews had to be removed when the burial vaults below the church began to give off a bad smell. However, the current seating and some of the wall paneling was made from the old pews when remedial work was done to the vaults. The choir stalls and lectern are relatively new.<br />

Outside, note the village stocks to the left of the porch and, above, the double-faced sundial to catch the morning and afternoon sun.