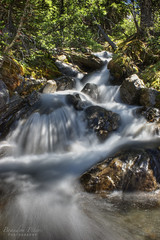 I have a confession to make, I am addicted to blue. I don’t like my pictures when they don’t contain it. I don’t know why this is, luckily for this photo there is a tad bit of sky 😛 I really don’t know why I don’t like other colours as much but all I know is that I end up brushing way too many of my photos off because they don’t have blue.

Anywho, we** went to the Lake of the Hanging Glacier and it was one of the most beautiful places I have ever been to. I will upload the shot of the lake in the next few days as it needs some work but this is a shot of one of the many waterfalls along the way.<br />

we** – I feel like I should explain "we" because I always say it but who does that refer to?.It does not always include the same people, it is usually either a couple of friends, Justin Thomae, Derrick Friesen, and Joel Friesen (no relation to Derrick) or my girlfriend (who is not on flickr). So there you go, that is "we" explained 🙂

The pastor at church today mentioned something that was not a part of his main message but he said something about Jesus being our king. That got me thinking about how I treat my relationship with Jesus. I never really think of Him as a king, more of a friend or saviour. But I think that there are many times and places to think of Him as a king. Even if you had a king who was a friend you would still have to obey his laws and listen to that king when he commanded you to do something.

"They will make war against the Lamb, but the Lamb will overcome them because he is Lord of lords and King of kings—and with him will be his called, chosen and faithful followers."
-Revelation 17:14