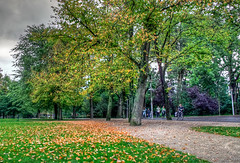 The Vondelpark is a public urban park of 47 hectares (120 acres) in Amsterdam, Netherlands. It is located in the stadsdeel Amsterdam Oud-Zuid, west from the Leidseplein and the Museumplein. The park was opened in 1865 and originally named the "Nieuwe Park", but later renamed to "Vondelpark", after the 17th century author Joost van den Vondel. Yearly, the park has around 10 million visitors.