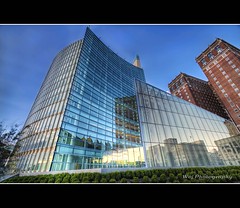 Originally set for completion in 2010, the new federal courthouse in downtown Buffalo has been beset by a series of construction delays brought about by issues– the latest of which — has cast a cloud of uncertainty over its latest projected completion date in August. Although expected to be opened by July 2010, construction of the building had been held back a year following concerns regarding the glass panel façade and a mold problem. Federal officials hope to have the courthouse opened by December 2011, the third time the date has been pushed back. Upon completion, the building will be the most expensive government building in the history of Western New York.

Photomatix
Seven shots in RAW (-3 to +3) converted to HDR and tone mapped in Photomatix Pro using Details Enhancer. Strength set to 85%, light smoothing set to high, luminosity to 2.0 and micro smoothing set to 4.0

Photoshop
– Noise reduction with Topaz DeNoise
– Added a layer of curves to lighten
– Curves layer for linear contrast.
– Layer mask the sky and front wall of glass with some saturation/vibrance
– Layer mask the sky with a cooling filter
– Sharpened with high pass filter at 2.4
– Topaz Adjust to enhance