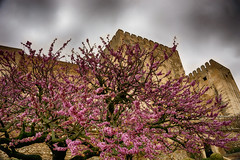 The Alcazaba, or fortress, is the oldest part of the Alhambra. It was built in the mid-13th century by the Sultan Alhamar, the founder of the Nasrid dynasty, after he fled from northern Andalucia and established what was to be the last Moorish stronghold against the Christian crusaders.