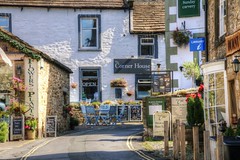 Although often described by local people as a village, Grassington was granted a Royal Charter for a market and fair in 1282 giving it market town status. The market was held regularly until about 1860. A change in land use from the early 17th century, when lead mining began to assume more importance, brought some prosperity, but Grassington’s heyday arrived during the late 18th and early 19th centuries. The opening of the Yorkshire Dales Railway to Threshfield in 1901 brought new visitors, many of whom settled, some finding work in Skipton or in the developing limestone quarries. The Old Hall at Grassington is reputedly the oldest house in Yorkshire, dating from the late 13th or early 14th century.
Today Grassington is the main residential and tourist centre in Upper Wharfedale